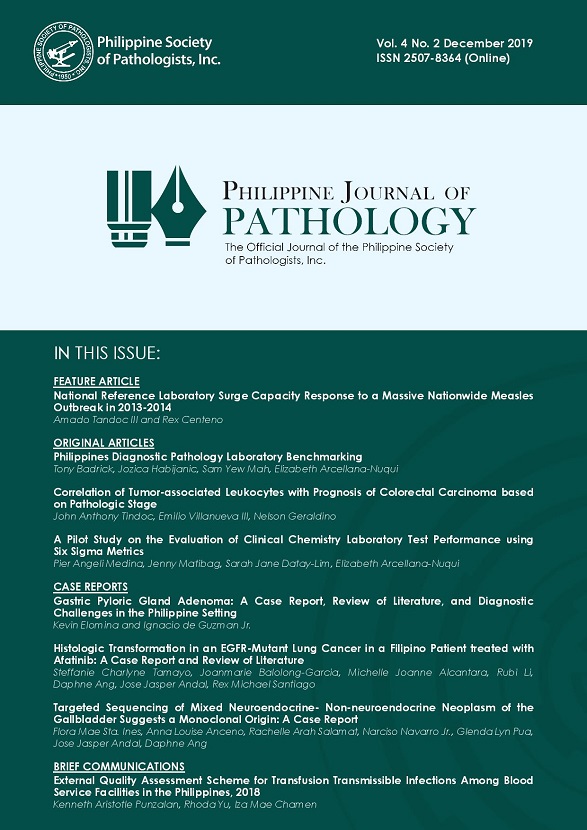 Introduction Six sigma has been used over the years, initially in manufacturing industries to improve quality by reducing the number of wastes and defects. In the laboratory, it can also provide measurement of quality using the sigma scale.

Objectives The main objective of the study is to evaluate the performance of tests in two chemistry analyzers using the six sigma scale.

Methodology A total of twenty (28) tests were evaluated on two Abbott Architect c8000 chemistry analyzers from September 2014 to July 2019 using results of quality control mean, coefficient of variation, bias and total allowable error to compute for the six sigma value. Both level one and level two third party quality controls were included in the evaluation.

ResultsOResults of the study showed the tests that were >6 sigma for both levels 1 and 2 throughout the 5 years. Di-Bil, CK, HLD, TG and UA were consistently >6 sigma for one machine while CK, Di-Bil, HDL, Mg, TG and UA were consistently >6 sigma for the other. Level 1 and Level 2 sigma scores were noted to be incongruent in some analytes as follows: ALB, ALT, K, TP for one instrument and ALB, ALP and AST for the other instrument. Electrolytes Ca, Cl, and Na were generally low (

Conclusion Using six sigma metrics allowed the laboratory to evaluate the performance of the chemistry tests objectively. Tests that are >6.0 sigma signifies world class performance and entail application of fewer Westgard rules with fewer number of runs while those that are

This work is licensed under a Creative Commons Attribution-NonCommercial-ShareAlike 4.0 International License.

The Philippine Journal of Pathology is licensed under a Creative Commons Attribution-NonCommercial-ShareAlike 4.0 International License.  Based on works made open access at http://philippinejournalofpathology.org
Author Biographies

Consultant Director for Chemistry and Immunology

Most read articles by the same author(s)